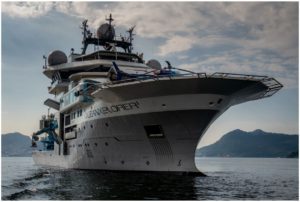 In 2014, when crude oil was selling for more than $100 a barrel, the cost of a new drill ship for oil exploration could run to $100 million.

So when the price of oil crashed, Ray Dalio, the founder of Bridgewater Associates, an investment firm in Westport, Conn., saw an opening. In 2016, he bought a lightly used oil ship at a very attractive price and transformed it into his dream — a vessel for big science, big technology and big storytelling. Mr. Dalio’s aim is to help Homo sapiens connect more intimately with the ocean, with what he calls “our world’s greatest asset.”

OceanXplorer is now making its operational debut, after years of rebuilding, upgrading and outfitting. So is Mr. Dalio, 71, as a new kind of entrepreneur. He sees his glistening, high-tech ship as a superstar not only of oceanic research but of video production, nature television shows and livestreaming events that will open the abyss to an unusually wide audience.

“It’s going to change things,” in part by inspiring a new generation of ocean explorers, Mr. Dalio said. Schoolchildren in classrooms will be able to guide the ship’s undersea robot through the primal darkness, uncovering riots of life. 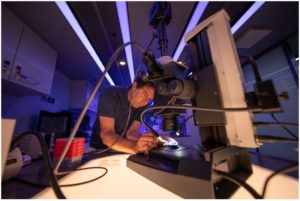 OceanX which owns and operates OceanXplorer is an undertaking of Dalio Philanthropies to explore the ocean.  Vincent Pieribone, PhD., a neuroscientist at The John B. Pierce Laboratory and the Yale School of Medicine is OceanX’s vice chairman and chief scientist.  Dr. Pieribone helped rig the new ship for science investigations and directed much of its exploratory planning.  In the photo shown here, Dr. Pieribone prepares a lanternfish sample for viewing under a microscope in one of several fully-outfitted biological laboratory spaces on board OceanXplorer.