The Laboratory and its Research

The John B. Pierce Laboratory is a nonprofit, independent research institute that is formally affiliated with Yale University. Founded in 1933 and housed in its own 3-story Georgian-style building directly across the street from the School of Medicine, the Pierce Laboratory affords a unique environment for interaction and collaboration among scientists within the Laboratory and in the surrounding Yale community.

The Laboratory has a long and distinguished history as a leading center for the study of physiological regulatory systems such as those that maintain body temperature, respiration, body fluids, and metabolism within healthy limits. The need to understand how these homeostatic mechanisms work is no less important now than it was at the time the Laboratory was founded, when inadequate heating, ventilation, and sanitation still loomed as serious environmental challenges to human health and comfort. Although advances in engineering and technology have greatly reduced the severity of those challenges, other aspects of the built environment that were intended to improve the quality of life have paradoxically created new stressors that impact public health in adverse ways. This is because the physiological systems that evolved to maintain homeostasis in the natural environment must now function under very different conditions in the built environment. For example, in the natural environment physical endurance, keen senses of taste and smell, and strong motivational states of hunger and thirst evolved to meet the necessity of finding and consuming adequate quantities of food and water. In today’s built environment, a sedentary lifestyle and an abundance of processed foods and beverages engineered to take maximum advantage of our sensory and motivational systems combine to distort the function of these systems and cause dysregulation. Indeed, physical inactivity and over-eating are major contributors to some of today’s most serious public health problems, including obesity, type II diabetes, and cardiovascular disease.

The study of homeostasic mechanisms and their complex interactions with the environment requires a variety of scientific approaches not typically found under the same roof. The Laboratory’s longstanding emphasis on multidisciplinary systems-level research is perfectly suited to this need. Collaborations that reach across such wide-ranging fields as regulatory physiology, sensory and behavioral neuroscience, brain imaging, molecular biology, and genetics place Pierce Laboratory scientists in a unique position to make breakthroughs in basic research that can be translated into improvements in human health and well-being. To learn about the current research programs here at Pierce, please visit the ‘Research’ page on our website http://jbpierce.org//Research.html.

The History of the Laboratory

John Bartlett Pierce was born on June 2, 1844, in Embden, Maine, and began his business career as a storekeeper in Buffalo, New York. Recognizing the ingenuity and value of steam heat in the chilly north, he started a boiler factory. The Pierce Steam Heating Company manufactured and sold steam and hot water heating devices, including radiators. In 1892, Pierce merged independent manufacturers into the American Radiator Company. The success of the American Radiator Company is reflected today both in its historic home, the American Radiator Building of 1924, which overlooks Bryant Park in New York City, and even more so through its merger in 1929 with the Standard Sanitary Co. that created American Standard, Inc.

Pierce remained thrifty throughout his life and refused to use his wealth to dominate the industry that he had established. Forever the Vice President of his own company, he did not create a family dynasty, and although he married twice, he was childless at his death on June 23, 1917. Pierce named more than 400 friends and employees in his will, bequeathing them over a million dollars in shares of American Radiator Company stock.

In the 1930s the work of Drs. Winslow, L.P. Herrington, and A. P. Gagge defined the physical principles that are central to how organisms exchange energy with their environment. Thermal exchange was measured in terms of four basic physical processes: radiation, convection, vaporization, and conduction. These pioneering studies in what is called human calorimetry laid the foundation for later studies in pulmonary and thermal physiology and air quality and pollution.

In the 1940s and 1950s research centered entirely on military efforts for World War II and the Korean War. These efforts included the development of thermal materials for clothing and housing. Pierce scientists at the Laboratory and engineers at the Housing Research Division developed construction systems and materials to provide affordable, comfortable, and safe housing that could be quickly mass-produced during and after the war.

In the 1950s and 1960s, Pierce scientists pioneered studies of building regulations and the physiological effects of the thermal environment. Professional organizations such as the American Society for Heating, Refrigeration, and Air Conditioning Engineering (ASHRAE) interacted closely with the Laboratory in setting industry standards for human comfort and health. Under the directorship of James D. Hardy, a renowned scientist in the fields of pain, thermal sensation, and body temperature regulation, the Laboratory came to place greater emphasis on basic biological processes that underlie responses to environmental stimuli, which is a hallmark of current research at the Laboratory.

Although an autonomous institute, the Laboratory has been formally affiliated with Yale University since 1966. The Laboratory is located adjacent to the Yale School of Medicine and its scientists hold joint appointments in various departments at the University. The formal affiliation with Yale offers Laboratory scientists full access to unsurpassed intellectual and professional resources while providing the University with the expertise of internationally recognized scholars in research areas related to the Laboratory’s mission. More information… 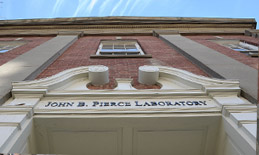 To conduct basic research on the interactions between physiological systems and the stresses imposed by the modern environment, with the goal of optimizing these interactions to improve human health and comfort.