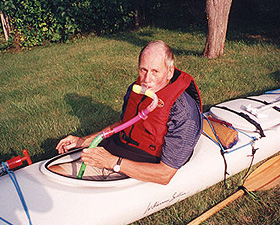 Although Dr. DuBois’ interests have centered on clinical respiratory physiology, they have included space cabin atmospheres, underwater habitats, air pollution toxicology, and comfort of respiratory protective devices. He spends summers studying marine biology in Woods Hole, Mass., where his activities have included sailing as well as research on respiration and circulation in bluefish.

The tracheo-bronchial tree in man, sometimes called the ‘respiratory dead space’, has turned out to be an active site of production and absorption of nitric oxide gas, particularly in asthma. The deeper regions of the lung, or alveoli, conventionally called the site of gas exchange, also can be stimulated to produce nitric oxide by injection of endotoxin, using anesthetized rats for those kinds of tests.

By collecting small quantities of gas expired from the upper airways (trachea, bronchi, bronchioles, and respiratory bronchioles), our laboratory examines gas concentrations appearing spontaneously, or remaining after instillation, in fractions collected to determine the rate of gas production or absorption. We use normal gases such as carbon dioxide or test gases such as nitrous oxide (‘laughing gas’) to examine gas exchange in those ‘dead space’ zones.

The relevance of this research to human health is that the tracheo-bronchial tree is the site of inflammatory or allergic reactions in humans, and is involved in inhalational toxicology, chronic bronchitis, asthma, and deposition of fine dust particles.